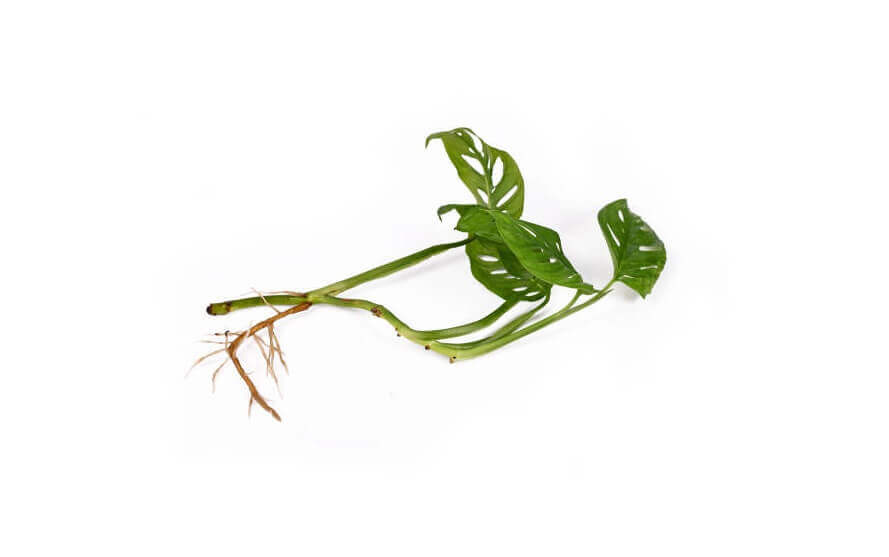 Monsteras are known for their large, perforated leaves. The leathery leaves are long and oval in shape, with deep cuts on each side of the midrib forming somewhat oblong holes of various sizes. Along with the fact that they need less care and are easy to maintain, this peculiar leaf feature has led to Monsteras immense popularity as a houseplant. There’s also another feature that adds to the peculiarity of this herbaceous, fast-growing houseplant. The numerous long, brownish, and tough outgrowths from different parts of the plant’s stem. These are known as aerial roots.

What Are Aerial Roots?

Monsteras are hemiepiphytes which means they spend at least some part of their life cycle as an epiphyte. They develop aerial roots but also have connections with the ground, forming soil roots. In the initial phase of their growth, aerial roots have a knob-like appearance and are white in color, which over time turn brown with maturity. The aerial roots grow from the many nodes present in the stem, especially around the axis where the leaf petioles – the thin, erect stem of the leaves – meets the main stem. Monstera aerial roots can vary in their thickness from 1.5 mm to 10 mm.

What Are The Functions Of Aerial Roots On Monstera Plants?

Monsteras are native to the Central American tropical forests. They are Aroids or plants belonging to the family Araceae. Aroids are climbing vines and need some form of support or the other to reach higher above the ground. In their natural habitat, Monsteras use tall trees by attaching themselves with their aerial roots, gaining height for better light exposure above the canopy.

In the typical epiphytes, the aerial roots perform few basic functions like absorbing moisture, taking in mineral nutrition, and also performing photosynthesis to some extent. In hemiepiphytes like Monsteras, they are primarily grown to reach the ground from greater heights and then subsequently rooting. But they also serve other additional purposes.

Following are some of the functions of aerial roots on Monstera plants:

Native to high humidity regions, Monsteras need moisture in high quantities. Aerial roots are able to provide moisture if needed in case of lack of water, by absorbing from the atmosphere.

Monsteras are unable to stand on their own and need external support to climb. Aerial roots provide the plant, which can reach up to 60 feet in the wild, with the support needed to attach themselves to trees or other structures. Indoors, the aerial roots need to be adjusted around the supporting pole.

The pores in the aerial roots help the plant with the exchange of air, whenever needed, especially in the case of waterlogged soil. Aerial roots also assist the plant to grow higher and get better access to light.

When the aerial roots grow longer, they reach the soil and convert into normal roots, providing water and nutrients like any underground roots.

What Are The Different Types Of Roots On Monsteras?

In all Monstera grows three different types of roots in their lifetime. These three root types also differ in their anatomical development and in their growth pattern.

As defined earlier, aerial roots are those roots that grow in the air, above ground.

These are the roots that started off as aerial roots and after growing long enough to reach the ground, they become subterranean roots.

Differences Between Aerial Roots And Other Roots of Monsteras:

Apart from the difference in origin of these roots on the Monstera plants as described in the definitions above, there are marked differences between the three root types.

What To Do With The Aerial Roots On Monstera Deliciosa Plants?

Aerial roots on Monsteras are as natural as the perforations in their leaves. It is not an abnormality but a part of the plant’s growth process. If the aerial roots are not a hindrance, to the plant or to the decor of the area where the plant is placed, you can leave them as they are.

Since Monsteras need to be supported as they grow, you can tie the aerial roots while you are attaching the plant stem to the support stick or pole. This also aids in keeping the growth of the aerial roots around the pole, ensuring a neater and more organized appearance of your Monstera plant.

You can also choose to trim them to control their growth. As aerial roots can grow fast and in great numbers, they can become quite excessive to the point of entangling the plant or tipping over the container due to their weight. Trimming them is the easiest solution. Make sure to use a clean, sharp, and properly sanitized pair of scissors to trim the roots. This will help prevent the introduction of any bacterial or fungal disease into the plant.

Pruning is another option that can be done by cutting at the spot where the root meets the stem. It needs reminding that when pruning is performed, it may encourage more growth and even multiple aerial roots growing in the same area.

What is the difference between aerial roots and soil roots?

The basic difference between the two roots is in the name itself. Aerial roots being air-borne roots and roots that are subterranean, growing underground are referred to as soil roots.

Are aerial roots specific or unique to Monstera?

As explained earlier, many different types of plants showcase the growth of aerial roots for several different purposes. While the presence of aerial roots on Monstera plants does not harm the host plant or trees, in other plant species the relationship can be harmful. Aerial roots of parasitic plants actually take nutrients from their host plant, leading to depletion of nutrition from the host plant. In other plant species, aerial roots can provide a secondary means of propagation, in case a segment of the plant gets cut off.

Is it safe to trim the aerial roots of Monsteras?

Can Monstera’s aerial roots be put in the water?

There is no such necessity to keep the long aerial roots in the water as they are meant to perform their functions by being air-borne. Putting the roots in water may do more harm as it can cause the roots to rot. It is ideal to instead spray the aerial roots with water.

Should the aerial roots of Monsteras be left to root in the soil?

As in the case of Monsteras growing in the wild where aerials roots can grow into the soil if the aerial roots touch the soil of the container you can allow them to root. If you do not want the network of aerial roots in the soil, you can easily trim them early when they start growing longer than desired.

Is it possible to grow a new Monstera plant from the aerial roots?

The difference in the anatomical features of the Monstera’s aerial roots prevents them from propagating like the subterranean roots. It is of great advantage if you have a node on a stem with multiple aerial roots, which can then be used for the propagation of the plant through the stem cutting method. To do this the cut needs to be done beneath the node.

How long does it take for aerial roots to grow?

Once a Monstera plant is propagated, it can take only up to about two-three weeks for the aerial roots to start growing on your plant. The ideal growth conditions will help in the proper growth and development of the plant along with the aerial roots.

Aerial roots on Monsteras are harmless and will not damage the wall or any structure. These roots are unlike other sticky aerial roots and do not have the features to stick or dig into the structures.

Ranjan Singh Moirangthem is a media professional based in India, currently working as a freelance copywriter. Growing up in a hill station and now living in a concrete jungle, he finds solace in the green corners of the city, be it parks or his housing society garden. He’s even passionate about plants and gardening and shares his experience by writing in-depth and well-researched articles for our readers.

Can You Propagate A Monstera Plant Without A Node? The Truth About Monstera Propagation Methods

Why Is My Snake Plant Drooping Or Falling Over? Causes And How To Fix It

Gardenerstoolbox.com is a participant of Amazon Services LLC Associates Program, an affiliate advertising program through which we earn fees by linking products and goods to amazon.com. We earn only from qualifying purchases with no extra cost added to our readers.

We use cookies on our website to give you the most relevant experience by remembering your preferences and repeat visits. By clicking “Accept All”, you consent to the use of ALL the cookies. However, you may visit "Cookie Settings" to provide a controlled consent.
Cookie SettingsAccept All
Manage consent

This website uses cookies to improve your experience while you navigate through the website. Out of these, the cookies that are categorized as necessary are stored on your browser as they are essential for the working of basic functionalities of the website. We also use third-party cookies that help us analyze and understand how you use this website. These cookies will be stored in your browser only with your consent. You also have the option to opt-out of these cookies. But opting out of some of these cookies may affect your browsing experience.
Necessary Always Enabled
Necessary cookies are absolutely essential for the website to function properly. These cookies ensure basic functionalities and security features of the website, anonymously.
Functional
Functional cookies help to perform certain functionalities like sharing the content of the website on social media platforms, collect feedbacks, and other third-party features.
Performance
Performance cookies are used to understand and analyze the key performance indexes of the website which helps in delivering a better user experience for the visitors.
Analytics
Analytical cookies are used to understand how visitors interact with the website. These cookies help provide information on metrics the number of visitors, bounce rate, traffic source, etc.
Advertisement
Advertisement cookies are used to provide visitors with relevant ads and marketing campaigns. These cookies track visitors across websites and collect information to provide customized ads.
Others
Other uncategorized cookies are those that are being analyzed and have not been classified into a category as yet.
SAVE & ACCEPT